Driving down the streets of Maputo, you will see bras fluttering in the branches of trees, stalls festooned with dangling shoes, pavements layered with rows of T-Shirts, kerbsides dotted with underpants. Imported clothing is a big business in Mozambique. Whether or not this is a good thing for developing countries is frequently debated, with a common accusation being that it inhibits those countries from manufacturing their own material and clothes. 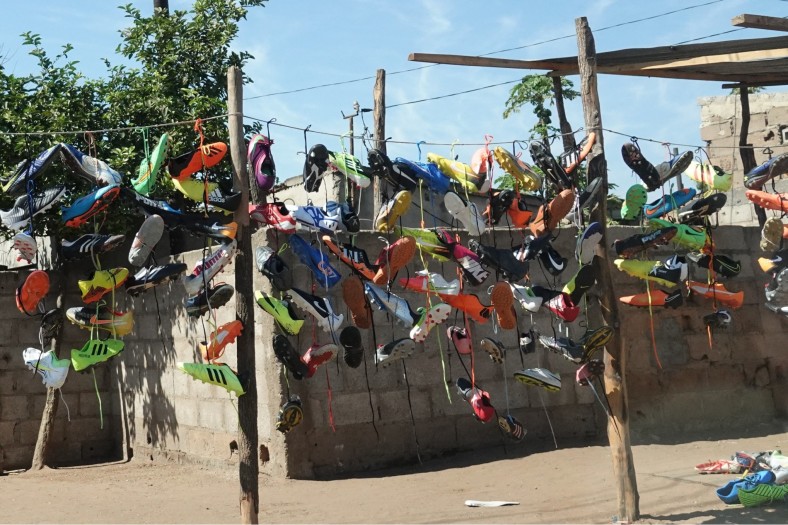 In this context, it has been really good to see that Maputo has many thriving tailors, making gorgeous outfits out of capulanas. Capulanas are lengths of cloth which can be used for many different purposes: towels, scarves, baby carriers, sunshades, aprons, capes, curtains, headdresses etc. Every woman has a number of capulanas: some will be used for work, some will be reserved for special occasions. 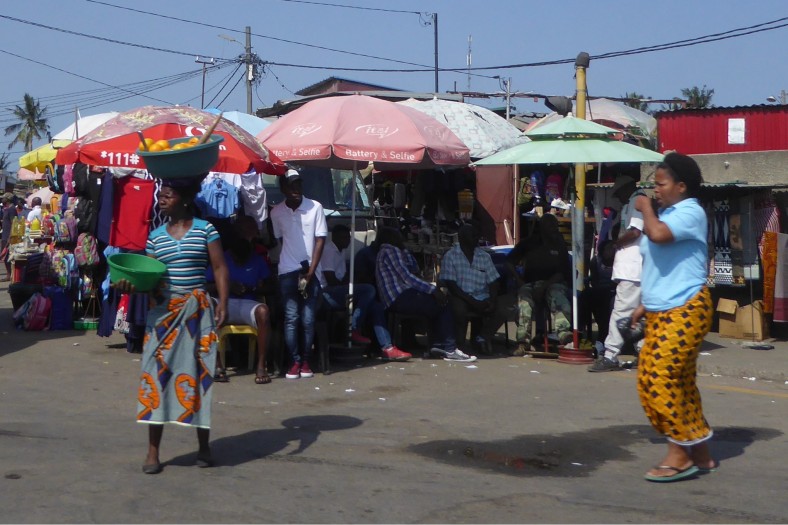 Although capulanas are usually worn like a sarong, fashion-conscious women are increasingly using tailors to turn them into custom-made dresses. Men commission stylish capulana shirts – and couples will often wear matching outfits.  We’ve been to two weddings where capulanas have provided vibrant splashes of colour, in both male and female outfits. 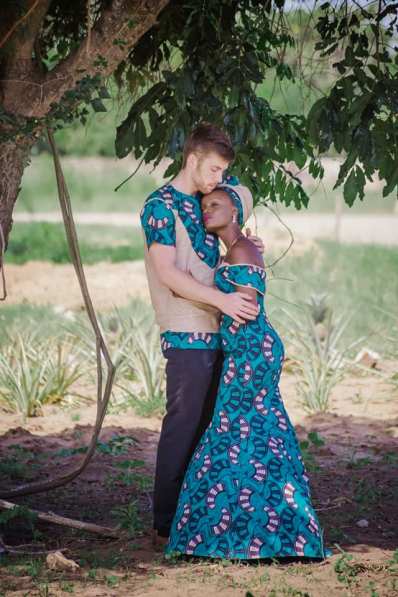 At Christmas, our friend Tino gave me a capulana, while he had a shirt made for Paul in the same fabric. Much as I liked the pattern of the capulana, I generally find them hard to tie and to wear comfortably so I decided to get it made into a dress, along with a second capulana I’d recently bought.

My friend Heather needed to visit the tailor and offered to take me along with her. The next step was to find a pattern. This basically involved searching online for pictures of dresses and printing them off. If you search “capulana dress” on google images, you will see a bewildering array. I finally chose two, more out of desperation and exhaustion than anything else.

The journey to the tailor’s house was not exactly straightforward. Heather recalled that he lived in the suburb of Magoanine (“Magwa-neeny”). She also remembered that after leaving a roundabout, you had to turn right at the second of two cellphone towers. There were vague memories of blue gates at which one would turn left or right. As you might guess, this is a place where google maps and GPS are not much use; a place where the streets literally have no name.

Before long, we became increasingly lost in a rabbit warren of sandy lanes, not much wider than the car. Round and round the lanes we went, in a frenzied spiral, unable to even remember how we had got there,. Curious bystanders stared, watching us go back and forth, retracing our route. Eventually we had to call the tailor for help. Minutes later, a woman appeared at our window. She jumped in and led us this way and that way until we arrived outside a little cement block house with an even smaller tin-roofed shed on the side. Inside the shed were three young men, hunched feverishly over sewing machines. The air was filled with whirring and clicking. Scraps of fabric were strewn all over the floor. We had arrived!

One of the men took my capulanas and pictures. He quickly measured various parts of my anatomy in a rather offhand way, which did not inspire confidence. He asked for a deposit and told me to come back in two weeks. He also revealed himself to be a Manchester United supporter, so I wasn’t hopeful that Paul would want to join me next time. On leaving, we carefully retraced our steps through the maze, taking photos at every junction, so that it would be easy to find.

We did such a good job that when I returned two weeks later with Paul, we found our way back to the little shed without faltering. The dresses were revealed and I was ushered to a curtained-off corner of the room to try them on. Unfortunately it was a very hot day, and both dresses were much too tight-fitting, so there was a lot of uncomfortable wriggling and wrestling as I tried and failed to get into them. The young men were very patient and each dress was altered there and then, although this involved a lot of ironing after every alteration, so I got hotter and hotter as I squeezed myself in and out. Meanwhile, Paul sat and waited, somehow managing not to be too rude about Manchester United. Apparently he was exchanging all sorts of grins and winks with the young men as I emerged and disappeared behind the curtain.

Finally the dresses were ready. They were beautiful – though I am not sure if I will be able to eat very much while wearing them. Any pretensions of looking good were pierced when, as we left, a nearby woman encouraged her toddler to “wave goodbye to granny”.

Should you ever want to go to the tailors of Magoanine, this is how to find the way:

Take the first left at the Magoanine market roundabout and after two speed bumps, turn off the road, sharp right, into the community, driving straight past the second of two cellphone towers. You will pass a sign to “Jardim Infantil”.

Turn right at the large blue gates with a tree stump opposite them, and then first left. Follow the lane round right and then take a sharp left at the wall with royal blue gates.

Turn left at the next junction and then left again. Easy!

*Thanks to Caralyn Duignan for her roadside photos!*

2 thoughts on “The Tailors of Magoanine”