When you live alongside hundreds of others, boundaries become particularly important. The main type of boundary here is the caniço (reed) fence. These fences are skillfully constructed by the maintenance workers here; strong enough to withstand wind and rain, although sometimes completely flattened by the bigger storms that blow through.

These fences are also gradually eroded by the eager little hands of those who would like to peer through (just look at the state of the fence around our garden gate) – or who would like to use a piece of cane for other purposes –  e.g. to make a toy rocket launcher or to reach fruit just out of reach in the overhanging trees. 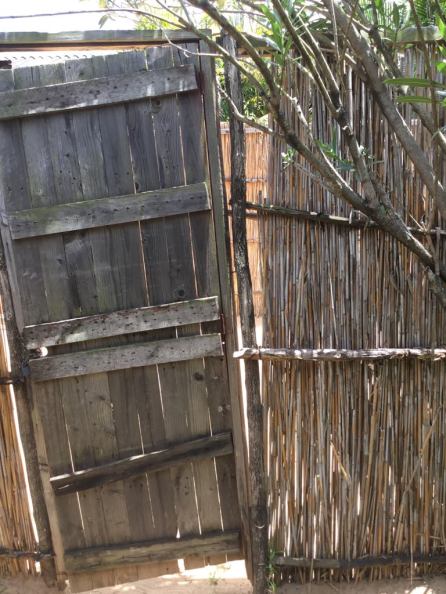 The caniço fence around our garden is a vital boundary for us, giving the illusion of privacy. It is also a great source of entertainment as it is rich in life. It is both a runway and a shelter for lizards; it is full of insects, big and small, and this in turn makes it a place where birds will look for food. They also tear off strips of cane to use as nesting material. 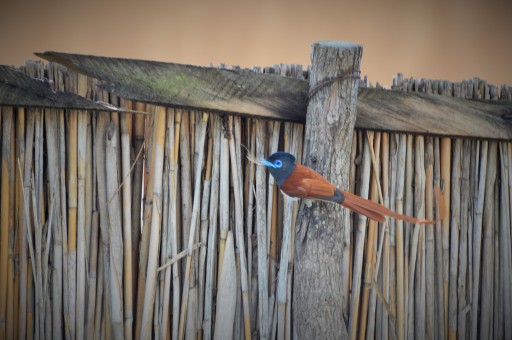 The fence is a place where birds like to perch – whether to survey their territory or, less grandly, use it as a bird-toilet.

More recently, we have seen a family of bulbuls use the fence as a training ground for a fledgling. It’s a time of year when baby birds can often be found on the sandy ground – but this is no cause for alarm. they are simply biding their time and strengthening their wings, using the caniço fences as shelters and then climbing frames before finally flying away to independence. I first became aware of this when I walked out onto the verandah one morning and felt I was being watched. I saw something new in my peripheral vision and turned to look. There it was. Actually, I am convinced it’s a “he”. So, there HE was. 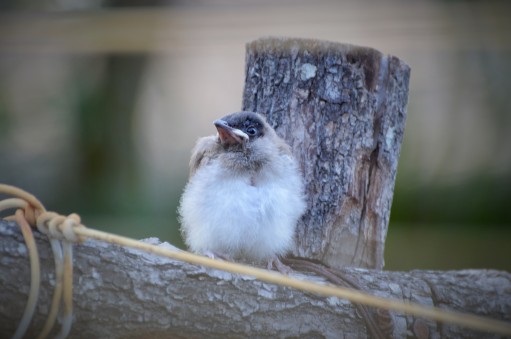 Over the next few days, whenever I looked for him, he was in a different place on the fence. Like a kind of “Where’s Wally” test. Sometimes it was easier to look for the adult birds and see where their attention was focused. For example, on one particular day, we saw Mum and sister snuggled on a branch above the fence, while Dad brought lunch. But where was baby? 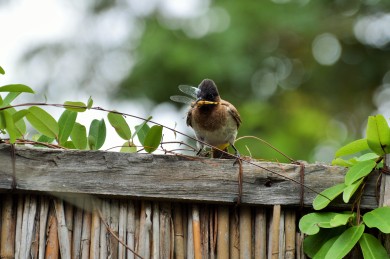 The next day he wasn’t on the fence at all – but then we spotted him on a drain cover.

Later that day, he reappeared back on a completely different section of fence, and spent the next day or so going up and down the supporting struts. 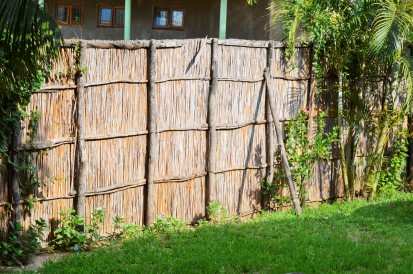 Not long after that, we couldn’t find him at all, but the attentive adult birds led us to spot him in a bush, free at last. 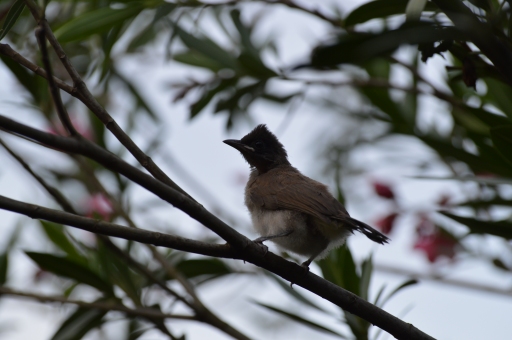 One last fence-spotting before I end this post. The other morning, I was washing up and, again, felt I was begin watched. I lifted my eyes from the sink and there, on the fence in front of me, was the brown-hooded kingfisher, whom I’ve heard so many times but have rarely seen except from a distance.  I took a few photos through the glass but he/she flew off as soon as I opened the door to get closer. Apparently there are ten varieties of kingfisher in this part of Africa. In case you’re wondering, five of these do not live on fish and, instead, feed on insects.  We have plenty of insects here (far more than I would like) but I can put up with them if it means more visitors to our garden fence.

2 thoughts on “On the fence”