This year, I’m taking a different approach to fundraising by raising money for two charities. On April 3rd I will be taking part in the Paris marathon for Walk the Walk (WTW) – this amazing charity has raised millions of pounds to help breast cancer sufferers. In addition, for every pound my friends donate to WTW, Paul and I will be making a personal donation to a second charity. Here is Paul to tell you about where that money will go. 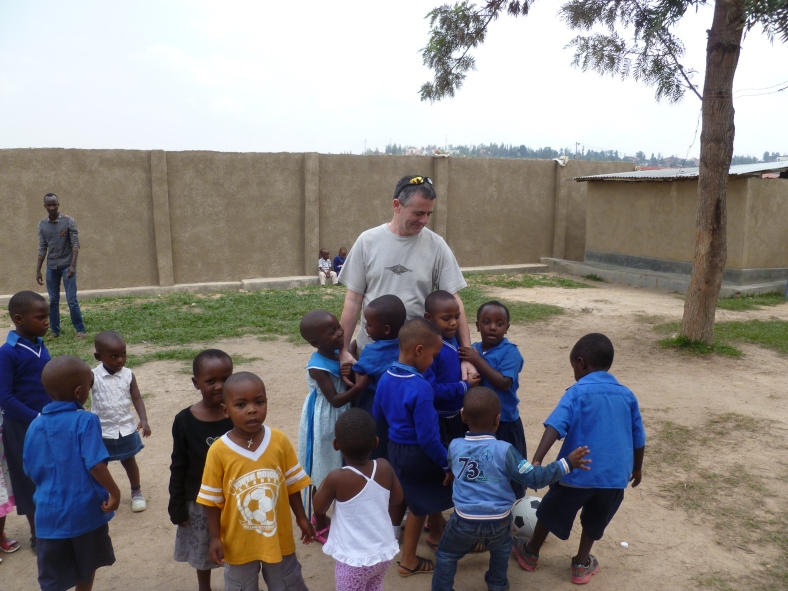 During half term I went on a school trip to Rwanda. (I know, when I was at school Reddish or Rochdale would have been more like it).  Our school has connections with Rwanda and our headmistress is the patron of the Rwandan Sisterhood Association (RSA). You may not have heard of the RSA – I hadn’t until recently. In their own words: “After the 1994 Genocide Against the Tutsi, Rwandan women living in the United Kingdom decided to create a support group, The Rwandan Sisterhood Association, to bring together women uprooted from their motherland and give them space in which to unite and work together to better their lot in the belief that a united community is a good foundation for the unity of a nation, especially one like Rwanda that had been badly fractured by the genocide.”

One of the major themes of the visit was to study the causes of the Rwandan genocide.  We visited the genocide museum which presents the heartbreaking story of the disintegration of a nation, and its miraculous recovery achieved in no small part to its groundbreaking peace education process. We also visited two churches where thousands of people were massacred.  I have seen things that I will never forget – thousands of items of victims’ clothing laid across church pews enclosed by walls damaged by  bullets and exploding grenades.    In an adjacent crypt, row upon row of skulls and other human bones were displayed.  It was powerful, moving and appallingly tragic.  10,000 people died every day for 100 days while the rest of the world did nothing.

In contrast to these very moving experiences, we also visited a number of inspiring projects to see how the RSA are doing their part to help rebuild the country. For example, we visited an antenatal clinic (in a tent) in a poor part of Kigali.

Healthcare is not usually free in Rwanda but this clinic provides a free service from a Canadian and a Rwandan midwife. Then, as birth approaches, each woman is given a “mama pack” from the RSA. The mama pack contains all sorts of items e.g. a surgical blade, cord clamp, birth mat and sterilized gloves. The packs reduce the chances of infant and maternal infection/mortality and significantly reduce the cost of having a baby in hospital, as all the items would normally be charged for by the hospital.  (If a mother cannot pay the bill, then detention ensues until someone can buy them and their baby out!)

Our school is going to be fundraising to provide mama packs. Sally and I decided we’d like to help with this by matching sponsorship given to WTW (breast cancer charity) for the Paris marathon. Each pack costs roughly £20 to assemble. Sally is aiming to raise at least £300 for WTW, which would mean that in addition, at least 15 Rwandan Mums will be helped to deliver their babies in safe conditions.

We know that many of you have sponsored Sally generously in the past, but we would be grateful for any donations no matter how small.

You can find out more about the mama packs here:  and Walk the Walk here.

If you’d like to sponsor Sally, the link to her fundraising page is here: