I’ve been walking up and down the same stretch of canal for a long time. Around 10 years ago, I saw my first kingfisher and I could hardly believe my eyes. Until that point, kingfishers were just something I’d seen in books or on TV. I particularly remember Bill Oddie getting completely camouflaged and lying in wait for an age, just to catch a glimpse of one. I thought of them as rare. Yet once I’d seen one kingfisher, I began to see more, until it got to the point that I would see one pretty much every time I walked up the towpath.

For a while, my only clue was the blue streak glimpsed in the corner of my eye, but then I began to learn how to recognise their flight path: If I stayed alert for that low, purposeful “buzz” across the water, I would see and recognise the kingfisher mid-air and then wait and watch it perch on the branch where it had landed. At certain times of year, the russet of its breast would be the giveaway sign – especially in the winter, when the orangey red blotch in the trees was unlikely to be an autumnal leaf. Captivated I would watch and wait and then, sure enough, I would see that dazzling burst of sapphire a moment later. Then there were the times when I would be walking up the towpath and would get a strange feeling – a premonition perhaps – that I should lift up my eyes. On doing so, I’d see a kingfisher on a branch just above my head. So close, so perfect and yet before I could get out my camera, it would be gone.

Kingfishers began to become a bit of a family obsession. I taught the children how to look for them and before long, we’d all seen them. Our interest only intensified during the years in Mozambique. Before leaving England, we’d bought a third-hand Mitsubishi Pajero from someone who was leaving Zimpeto and it was waiting for us when we arrived there. Was it a co-incidence that the spare wheel cover turned out to be adorned with a picture of a kingfisher?

Living on the edge of Maputo, there was not a great variety of wildlife to be seen. This was a result of war, floods and the fact that poverty was so severe that animals and birds were more likely to be eaten than conserved.  Nevertheless, in time, we discovered that Southern Africa had many different types of kingfisher and they were far more plentiful and common than in England. One of the places where we would see them without fail was the Kruger National Park in South Africa. There we would see pied kingfishers, giant kingfishers, pygmy kingfishers, woodland kingfishers, brown hooded kingfishers and more. Our favourite was probably the pygmy: with its impossibly beautiful shades of lavender and orange. Unfortunately, most of our photographs were lost when our hard drive died some years ago, but you can get an idea of the sheer beauty and diversity of African kingfishers by clicking on this link.

When we returned to England, the kingfishers along the canal gave me a sense of hope, especially in the first winters when I was battling depression and everything seemed barren and grey. I would trudge along under leaden skies, with a leaden spirit, the towpath stretching out before me, muddy, stony, bleak and predictable: the perfect metaphor for my life. Then, suddenly, a flash of blue would shatter the gloom and for a moment, my heart would soar with the bird and hope would blossom.

I made it my mission to get a kingfisher photograph, despite having an average camera without special lenses. For this, winter was the best time as the lack of foliage made them more clearly visible for longer periods. Their colours shone out like jewels when all around was dim and dull. 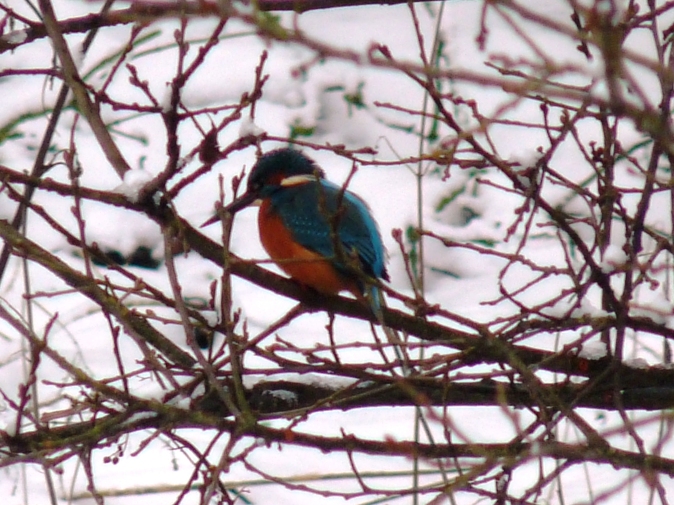 Over the past year or so, my training walks have been so purposeful and fast that I haven’t noticed or even thought much about kingfishers. More recently though, I’ve eased off the hard exercise and have returned to slow ambles up the towpath – a few miles here, a few miles there, resting my muscles before I start training again. I’ve enjoyed the slower pace, the time for reflection and the opportunity to observe the small details. Not surprisingly, I’ve started seeing kingfishers again. In fact, a few weeks ago I saw five in one short walk (including three at once, flying across the canal into a bush).

The best time for a sighting is after the dawn when the sun is just warming the air and all is still and quiet. Even though I am half-expecting to see one, each time it’s still a surprise, a shock, a heart-gladdening gift.